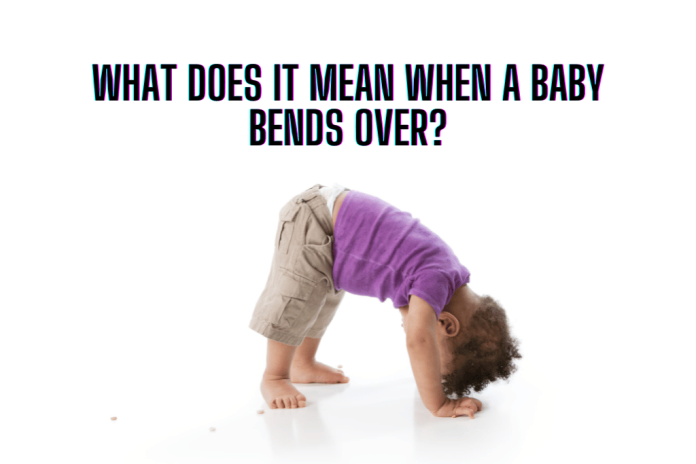 When you see your baby bending over, you may be tempted to rush to his or her aid, but don’t! Your little one has likely just learned how to roll over. Since you’re reading this article, let’s talk about why your baby may be bending over and what that means for their development.

What Does It Mean When A Baby Bends Over?

For babies, bending over and looking between their legs can mean several things. Bending over is a common move for many infants, and it is generally not a cause for concern. Here are some of the most common reasons why babies bend over:

Let’s examine this further and discuss all the possible reasons for this strange behavior.

Another Baby Is On The Way

Babies who bend over and look through their legs are often signs of another on the way. To many, this superstition seems ungrounded, while others claimed they discovered they were pregnant when they did a pregnancy test after the baby bent over.

When it comes to pregnancy superstitions, there is usually not much science behind them. You are probably right if common sense tells you it’s not true. Old wives’ tales say if a baby bends forward and looks through their legs (or performs the downward facing dog, for yoga enthusiasts), they’re either predicting a pregnancy or looking for another sibling.

I believe this happens because infants seem to be looking for something. This can be true of infants who have siblings. The infant often looks for the brother or sister they share to play with. But if they don’t have a sibling, they may be trying to find a friend they can play with, and that’s where the myth originates. Most experts claim that a baby is bending over because they want to look through their legs to work on their depth perception and to experience a different view of the upside-down world.

Thus, I recommend that you don’t rely too much on the old wives’ tale. While you never know what the future might hold, most babies want to expand their world rather than their family.

Many myths surround pregnancy. Stories and myths were created long ago to explain things that were not yet understood.

Other Reasons You May See Your Baby Bend Over and Look

You might notice that your baby bends over for various other reasons as they grow and develop. Bending over could be a normal part of a baby’s development.

During the first few months of a baby’s life, they are exploring our world for the first time. They learn what the world looks like, including upside down.

When bending over to face the ground, infants view the world from an entirely different angle. They think it looks funny and like an entirely new and interesting place.

Being Dizzy Is Funny

Some babies get a kick out of the experience of feeling a little dizzy. That’s because it feels new to them when they are inverted and brought upright again. If you notice your infant bending over and giggling when they stand up, they may find it funny to experience a rush of dizziness.

They Saw Another Baby Bending Over

Young children copy what they see other people doing, and that’s how they learn to talk, walk, and play.

Babbling is babies’ way of mimicking the sounds they hear from us. Until their muscles can figure out how to walk, they crawl. They will do it if they notice we’re bending over to pick up toys or stretching.

It is also natural that babies mimic what they see other babies do; babies seeing other babies being upside-down may more readily attempt this themselves. Everywhere you take your child, it’s very likely that he or she will imitate what is happening.

To Look Behind Them

Infants don’t know how to behave the way they are supposed to. Rather than turning their body around, they may arch their back and peek backward over their shoulders to see what’s happening behind them.

If a child does it just once, he or she may assume that it is the best way to complete that sort of thing and will go on to repeat it as often as possible.

In addition to learning to catch and kick things, your baby will also learn to stretch their legs and bend over as they grow. Babies’ repetition of new movements is a normal part of their body’s sensory system development.

By hanging upside down, a baby’s brain learns which muscles control the head and how to hold all that weight properly. This help develops their sensory and motor connections. New pathways are created in the brain when a baby learns something new.

Babies Are Full of Energy

Having a baby can often be overwhelming as they have so much energy and need to burn it off. They might crawl, climb, or even bend over and look through their legs to accomplish this.

You’ll notice your child will start discovering new things as they explore the world around them! Bending and looking through legs are among the milestones they’ll reach as they explore independently. Generally, toddlers start doing this between 14 and 16 months of age.

Children will keep doing this for exercise and amazement once they realize they can bend over without falling over. They will stretch their legs, play with friends, or even tumble.

Even young children may find themselves fatigued at the end of a long day; after that, a chance to be inverted can be restful and calming. Every so often, they need to take the time to wind down.

There is a chance that they might bend over when they are slowing down, are tired, in a fit, and so on. This may be a form of self-soothing behavior.

When To Call The Doctor

It can be concerning the first time you see your child do something new. Many parents wonder why their child picked up a new behavior, and some wonder whether they should seek medical attention.

Most of the time, parents should not be concerned, but there are a few circumstances when they should speak to their physician.

If You Are Concerned

If you have any concerns, it is always best to call your primary care provider. It is always better to be safe than sorry when it comes to babies. A pediatrician will examine your baby and conduct a physical exam to determine if this behavior is normal.

In general, babies are noted for performing a wide array of tasks, which may include the ability to bend down. If your baby does so, then don’t worry.

Why Does My Baby Do The Downward Dog Position?

Some cultures view this as the desire to find a brother or sister, haha! However, it’s perfectly normal from a developmental perspective!

This may occur when babies learn to crawl and integrate reflexes and then learn to stand without hand support once they are standing! Once they start walking, they often return to doing it.

Why Does My Toddler Stand On His/Her Head?

By exploring what their body can do and how it feels, toddlers gain a deeper understanding of their bodies and learn how to move effectively. Standing on their head helps toddlers develop cognitive skills, balance, and motor movement.

Why Is My Child Planking?

All these things are part of the development of those muscles, especially around the head and shoulders. Your child needs to have strength and muscle control for crawling. As your child grows, he or she may try other moves, such as balancing on their arms and feet or pivoting.

Can Babies Sense Your Pregnancy?

Some people think the mother is pregnant if a baby bends over. This is not true. Babies often bend over because they are looking for something to grab or get closer to someone. The bending over has no specific meaning, and no old wives’ tale explains what it might mean when a baby bends over. 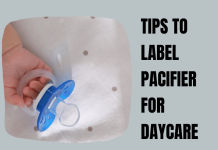 Tips on How to Label Pacifiers For Daycare: The Do’s and Don’ts 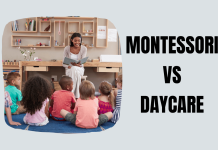 ​​​​Montessori School vs Daycare: Which is Right for Your Child? 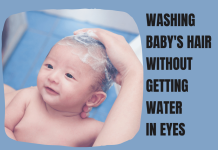 Gently Washing Your Baby’s Hair Without Getting Water In Eyes: A Step-by-Step Guide