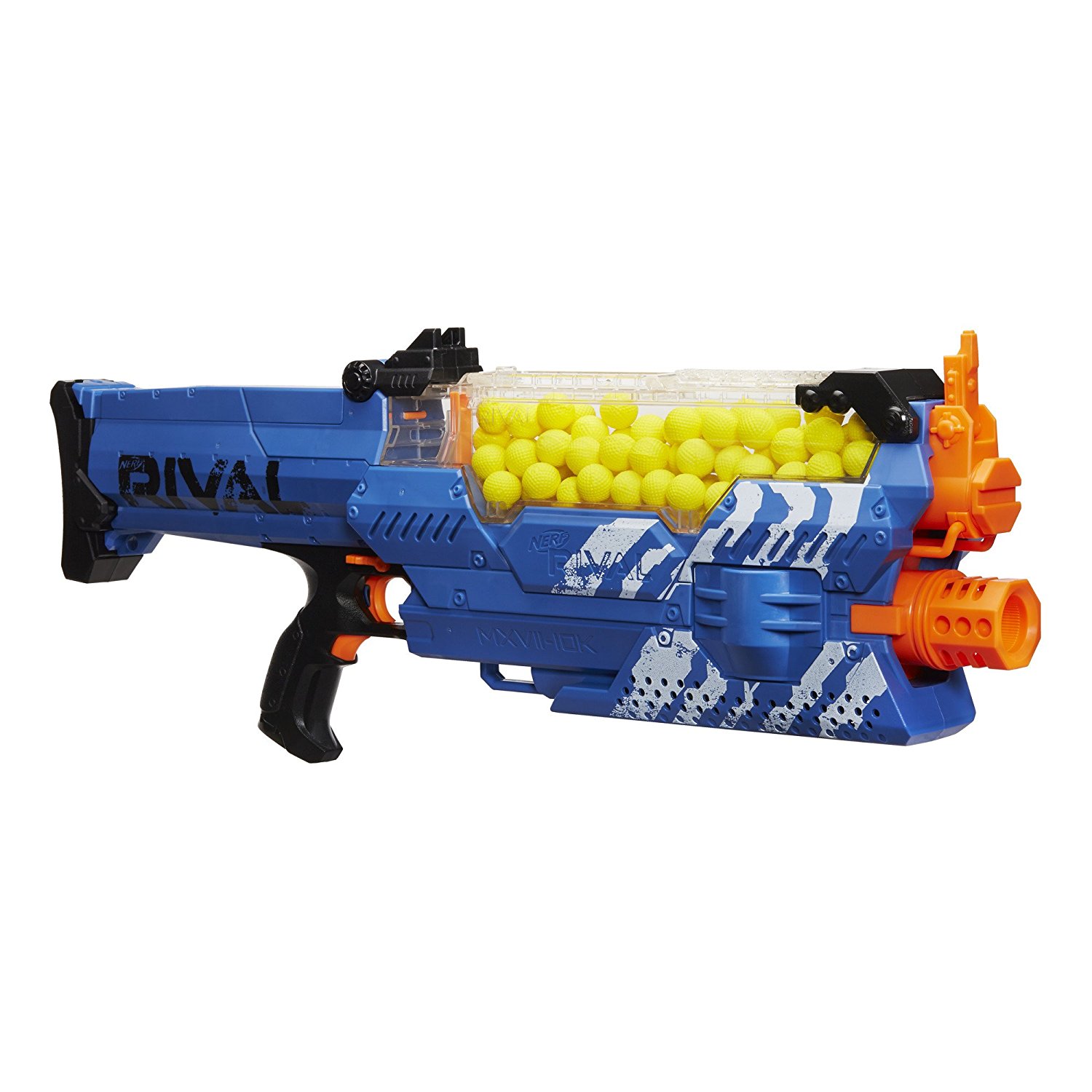 Nerf has held on their outstanding production quality for decades and have constantly advanced and improve with every new release. Nerf at the moment run two popular lines of production; the Elite and the Rival.

The Rival blasters are designed with dead-on accuracy in mind, with their rounds having a circular shape that makes them look almost like pellet guns but in larger, safer sizes.

They are built in aerodynamic shape and this ensures they fire high impacts at a higher velocity than their Elite counterpart.

Listed below are some of the best nerf rival guns for your intense fun blasting experience:

The Criteria for Selecting the Best Nerf Rival Gun

Power: The Nerf Rival design makes its stealth of power a step ahead of the Elite. The best of them currently fires with a velocity between 90 fps and 100 fps that is in the range of 27 to 30 mps while the dart travels a distance of minimum 75 feet. Anything below this in terms of speed and distance covered is not to be considered.

Accuracy: The Nerf Rival is built with precision in mind. Playing with the blasters will lose its ability to entertain if it’s not accurate with its shot fired.

Rival Nerf gun should fulfill this criterion without unnecessary aiming approach or strategy. The ammo is expected to travel in the exact direction it is expected.

Ease of use: The best Rival Nerf gun should be user-friendly in design that is should be easy to carry, handle and operate. Reloading the ammunition should also not be difficult as a lot of that might be done during the heat of battle.

Summarily it should be lightweight, easy to prime and comfortable to hold and operate 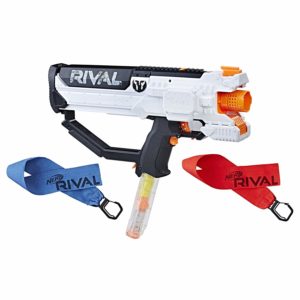 A fresh looking weapon that comes with 12 high impact rounds which ensures kids 14 years and above can be ready for combat. Nerf Rival MXVII-1200 Combat Blaster is from the phantom corps sub-series, it is a semi-automatic flywheel powered by batteries to keep up the momentum on the battlefield.

The Hera MXVII-1200 can rapidly fire at a velocity of up to 100 fps (30mps) with ultimate Nerf rival accuracy. The pack comes with one 12 round magazine and 12 high impact rounds plus a red and blue team flag to signify their groups.

The blaster has a trigger lock and tactical rail. It is powered with the use of 6 D batteries or the Nerf Rival rechargeable battery pack (none are of this are included in the pack). 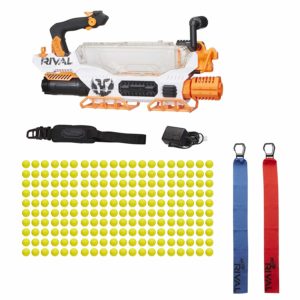 With this Nerf rival Prometheus MXVIII-20K; you experience serious intensity of the Nerf rival blaster which features the accelerated system to unleash up to 8 rounds per second. It is fully motorized and holds a whopping 200 rounds in its easy to load hopper.

The Prometheus MXVIII-20K comes with a rechargeable NiMh battery and a wall charger aside the blaster itself, 200 high impact rounds and instruction manual. The rechargeable battery means that there is no need to stock up on batteries to power up this juggernaut.

With this outstanding blaster, you could take aim and fire rounds at a velocity of 100 fps (30 mps). 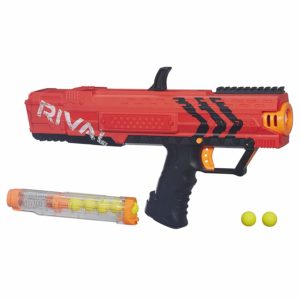 The Nerf Rival Apollo XV-700 is an ultimate precision and power blaster. This blaster has a spring action cocking mechanism and fires at a velocity up to 100fps (30 mps).

It has a trigger lock, a tactical rail, and a ready indicator. This blaster is designed for to give an edge during intense high impact actions.

The XV-700 model’s pack includes 7 high impact rounds, an easy to load and reload magazine which holds the 7 rounds and can be removed from the blaster with just the push of a release button. The tactical rail helps you to hold additional gear. 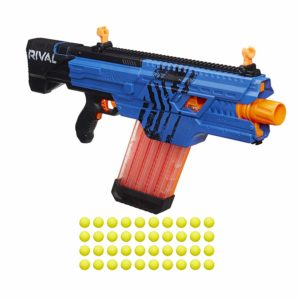 Unleash rapid fire blasting with this fully motorized Nerf Rival Khaos MXVI-4000. This high capacity blaster has an easy to load magazine which holds 40 high impact rounds which it can rapidly fire at a velocity of up to 100 fps (30mps). Everything about the Khaos screams big and powerful yet the design of this blaster is ergonomic, which makes it nice to hold and shoot even with the big and bulky size of the magazine.

It requires 6 D batteries, which are not included in the pack but buying the rechargeable battery pack, could well cover for that. Opening the pack, what you get is the khaos blaster itself, a 40 round magazine and 40 rival ammo balls plus the instruction manual. 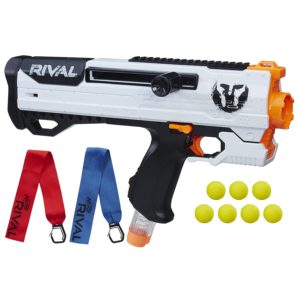 Battlers can storm into high intensity action with the Nerf Rival Phantom corps Helios XVIII-700 and be rest assured because this blaster is designed to fire rounds with bolt action blasting.

It blasts a round at a velocity of 100 fps (30 mps). Everything about this beautifully designed blaster speaks simplicity and class.

The Helios XVIII-700 has an easy to load magazine, a trigger lock and a tactical rail. The pack comes with 7 high impact rounds and it is recommended that you refer to the user guide before use as it requires an intermediate skill level from someone 14 years and above.

The pack also has in it team flags to help battlers identify themselves by team or to play the “capture the flag battle”. 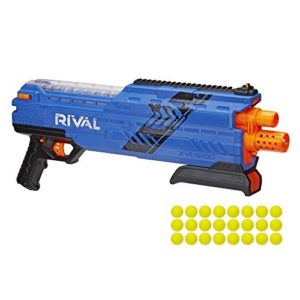 With the Nerf Rival Atlas XVI-1200 blaster, you’ll experience the intensity of precision battling as you unleash a double shot of high impact rounds at a velocity of up to 80 fps (24 mps) and at an impressive accuracy.

This may be useful when you want to pressure the opponent with more power than your average and standard round shooting.

You can prime the blaster with the spring action mechanism by sliding the pump handle backward and forward. The trigger lock could also be useful for added ease of use. The blaster’s pack includes a 12 round magazine, 24 rounds and the instruction manual. 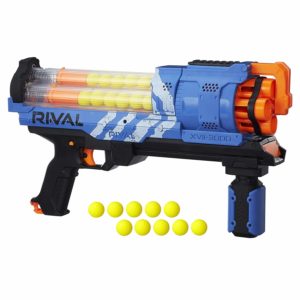 This high capacity blaster provides you an intense head to head experience. The Nerf Rival Artemis XVII-3000 holds 30 high impact rounds and with its rotating barrel and easy load integrated magazine, you can unleash quickly rounds upon rounds of slam fire action.

With very impressive accuracy, the high impact rounds travel at a velocity of 100 fps (30 mps).

The Artemis XVII-3000 is a brilliant all round blaster that has a rotating barrel, a trigger lock and a tactical rail.

It comes out of the pack completely assembled and since it is spring powered, there’s no need for batteries. All you need to do is load the load the 30 high impacts round that comes with the pack and launch out. 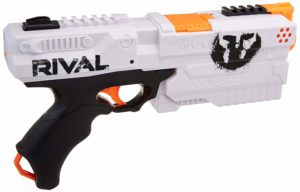 This Nerf rival gun model comes with a total of 5 rounds which are easily fired. This makes the blaster perfect for those who are still beginning with Nerf and need something that can shoot decently.

The spring action mechanism makes this rival gun series model a worry-free one as there are no needs for batteries.

The compact size of this blaster makes it easy to carry when the battles have to move fast and stay mobile. To load the Kronos Outdoor blaster, you open the breech and put in 5 high impact rounds, then prime it, take aim and fire.

The blaster sends the rounds blasting into battle at 90 fps (27 mps). The pack comes with 5 rounds, 2 flags and an instruction manual. 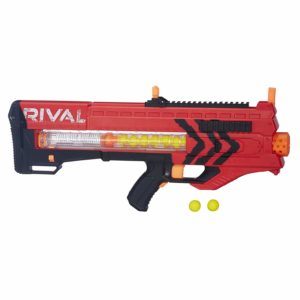 The Nerf Zeus MXV-1200 blaster is a simple but action packed designed Nerf gun. It comes with and can load up to 12 Nerf rival rounds.

It can fire semi-auto rounds with a velocity of up to 90 fps (27 mps). It has an easy load, ambidextrous magazine, a trigger lock and a jam clearing door plus a tactical rail for Nerf rival accessories.

It uses motorized blasting so it is very ideal for beginners or just for people who like to focus more on hitting the target with its flip up sights assisting in easy location of targets.

The Zeus is battery operated and requires 6 C sized batteries to run (the batteries are not included). 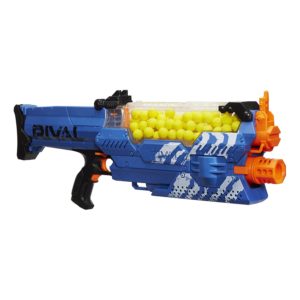 The Nerf Rival Nemesis provides ultimate precision with every blast action. It is fully automatic and flywheel powered and is hopper fed with a 100 round capacity.

It certainly is an outstanding Nerf gun with high impact round which fires faster at around 100 fps as opposed to 70 fps of the usual elite blasters and much more accurately. Its ergonomic design makes it nice to hold and shoot.

The nemesis MXVII-10K includes a trigger lock and tactical trail. It is quite easy to load and with its large hopper, you load fast and big, which affords you plenty of fire power for the Nerf battle.

This battery powered blaster is compatible with the Nerf rival rechargeable battery pack sold separately. (Note: It uses 6 D batteries which doesn’t come with it).

Are you a serious fan of Nerf wars and you’re in the market for a cool Nerf gun to play with, then you should consider one of the listed Rival series.

They provide immense fun and are very safe for you and your kids, 14 years and above by manufacturer’s recommendations. We hope this list of outstanding Nerf rival gun helps you to choose the best for you and your team.

For our team the most outstanding of this collection is the Nerf Rival Nemesis MXVII-10K though the Nerf Rival Prometheus MXVIII-20K runs it very close for us with its extra features in ammo and firing stealth; Nemesis is fully automatic, flywheel powered and is Hooper fed with 100 round capacity.

Its high impact round fires at 100 fps and its ergonomic design makes it comfortable to hold, simple to reload and easy to operate.