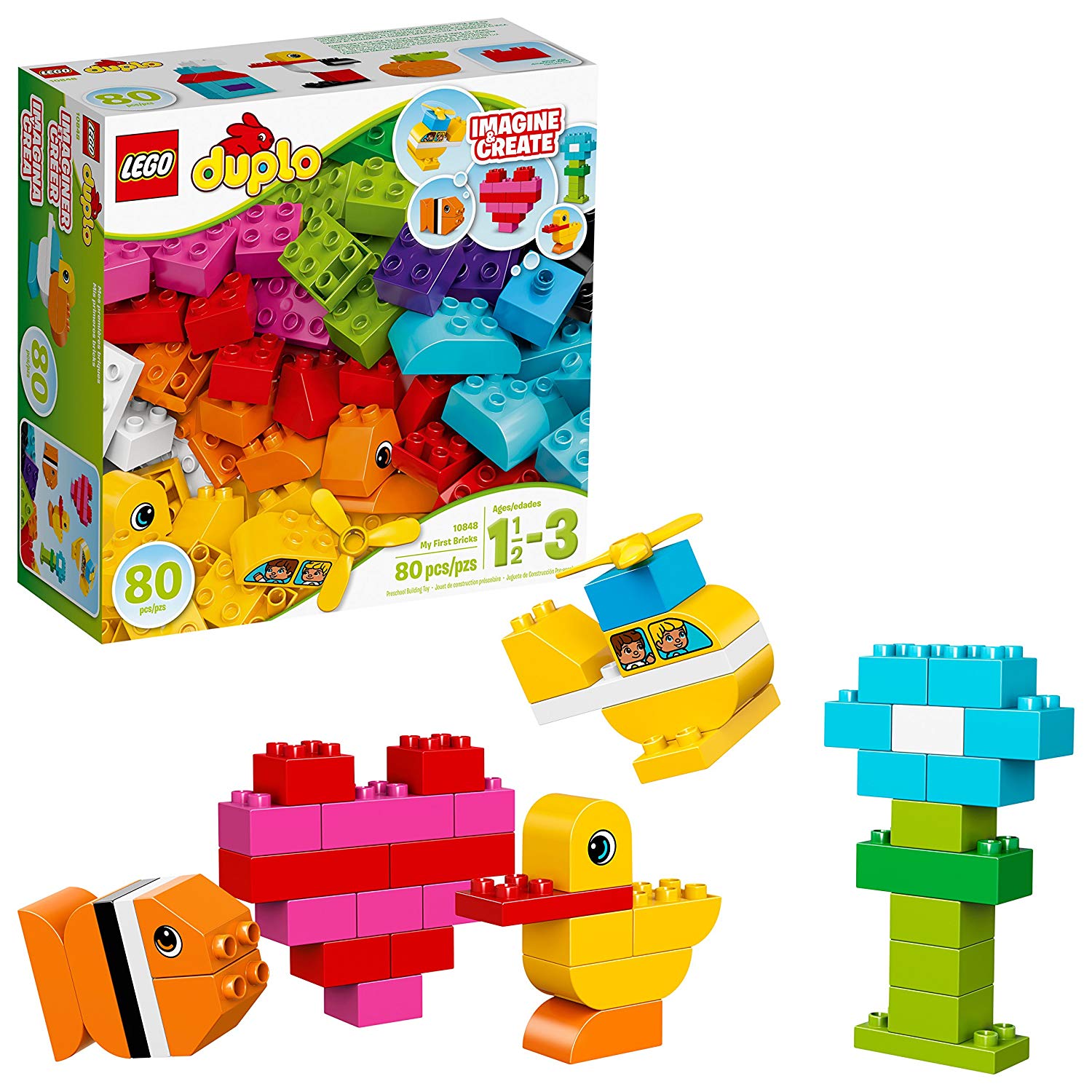 At three, kids are now at their prime toddler stage. Their energy can be exhausting for adults which is why getting Lego sets for 3 year olds is a good approach to keeping them occupied with activities that can improve their mental capability.

Lego sets, by their nature, force players to use more of their cognitive skills than gross motor skills. They need to focus hard to build or create objects from the several bricks and pieces that make up Lego sets. This can take several hours of intense concentration.

To that end, we got you covered with this review of the best Lego sets for 3 year olds. Now, you’d know the toys to buy if you want your hyperactive kid to take that energy down several notches with activities that can engage them mentally.

Criteria Used for Selection of Lego Sets for 3 Year olds

The common denominator of all the Lego toys we considered is this: they are all official Lego products. That makes all the products authentic and of good quality.

Basically, there was no chance of fake or sub-substandard Lego sets for 3 year olds making the list. The following were the variables that determine the toys that made the review

Age appropriateness – Though it is hard to accuse Lego of false advertising, it wouldn’t be remiss to make sure the recommended manufacturer age is actually correct.

Some very cool Lego sets, though recommended for 3 year olds, were either too basic or too advanced for them. These we had to cut out as kids would get easily bored with a toy that is too easy or get frustrated when the toys are too complicated.

For instance, LEGO sets with numbered/lettered bricks are important ways to expose kids to numbers and alphabets. Even bricks painted with everyday objects are avenues for children to learn new words.

Social skills – Lego toys that make provision for other kids to join the party made more sense because they teach kids a vital life skill: how to interact socially with other people especially peers.

Social skills would be invaluable to kids especially as they grow older and need to interact with others to get ahead in life.

Overall design – Using this criterion was hard because, bar a few, most of the toys we looked at scored high in the overall design.

Basically, we were looking for toys that would appeal to 3 year olds and add value to their lives. The toys that made the cut had to come with very interesting color combinations and concept in addition to embodying an idea children find fascinating.

Feedback from users – This proved to be a very critical factor in the selection of Lego sets for 3 year old kids.

Apart from a few cases, the feedback from users was positive. We decided to plump for toys with the highest ratings in any category.  Any Lego set with less than 4-star rating had to be dropped. 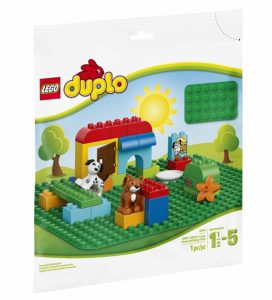 The Lego building plate is a base mat kids can start building any structure on. Imagine it as an all-purpose foundation for any structure and you would begin to understand how versatile this base plate is.

Measuring 15″ by 15″, your kid can dump his Lego bricks directly on the plate instead of the floor. This makes it easy to arrange the pieces instead of having to pick them all over the floor.

The base mat provides a steady foundation for anything built on it. It is left to your kid’s imagination to create anything with Duplo bricks.

However, this comes without the bricks, it is only base mat. And it is compatible with Lego Duplo bricks only. 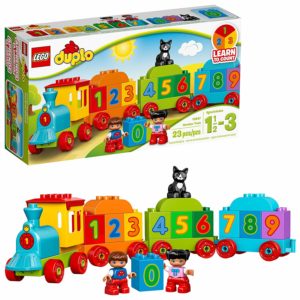 My First Train is a colorful Lego set for toddlers that use modern characters, decorated bricks, and accessories to provide fun and education at the same time.

For your 3 year old, this is a fun introduction to the world of numbers, counting, colors, and some household items and foods. They would love building and rebuilding this sturdy train. 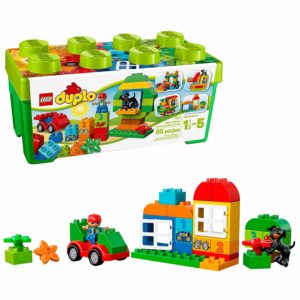 Let your child’s imagination run free with the colorful Duplo bricks that comes packaged in an all-in-one fun box. Your kid would dedicate hours to building, rebuilding and engaging in creative role play with it.

The set comes with a boy figurine, dog and the handy storage box. Also, there is a buildable wagon base with wheels that actually turn, two windows and numbered pieces.

This set comprises 65 pieces which are just enough for kids to build the 5″ high by 3″ long by 2″ wide house. 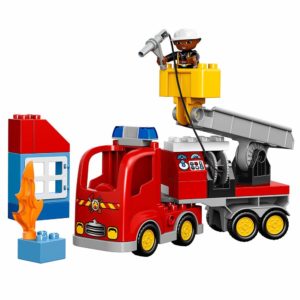 Your kid’s imagination would be fired up as they spin different scenarios of rushing to save the day in this Lego fire truck they created with the bricks.

Other accessories include the toy fireman and child-safe flame.

The fire truck is just the right size for your kid’s small hands to hold easily and have fun with. 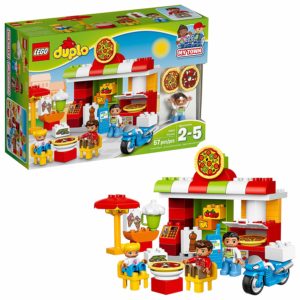 My Town Pizzeria is all about creating a world centered around a pizza business. How the Pizzeria looks depends largely on your kid’s ability to imagine and then create real-life scenarios using the building blocks

The 57-piece Lego pack features figurines representing the restaurant owner; a dad and his kid; a pizza delivery bike; an ice cream come: and a phone to take pizza orders from the public.

There are many accessories for your kid to build a complete Pizzeria and reenact the events of a typical pizzeria. 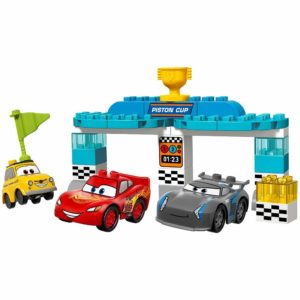 The three cars measure 1” high by 3″ long by 2″ wide fitting perfectly in the hands of a 3 years old kid to take for a spin around the race track.

The 31 piece set also features a race timer, Piston cup sign, checkered flags, and a buildable winner’s podium. Would your imaginative kid prefer to be Luigi who raises the flag or one of the race drivers? 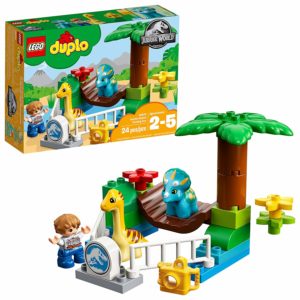 Exciting creative role-play doesn’t come any better than a journey into the world of prehistoric animals. This is what kids would get with Lego’s Jurassic World Gentle Giants Petting Zoo building kit.

Your kid would be able to build and rebuild the Jurassic World-themed park with Lego bricks. The set includes a Gray Mitchell figurine, 2 baby dinosaurs, a camera, flowers, a swinging bridge, and Jurassic World Icon brick.

The 24-piece pack would enable your kid to create different types of dinosaur enclosures along with new adventures to brew in the fertile imagination of your kid.

Kids lucky to have this easy-to-use pack would be able to master basic construction skills. 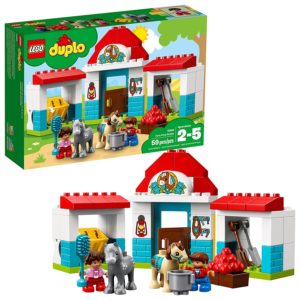 Introduce the rustic world of farmlands, stables, ponies, and farmhands to your kid with the Lego’s Town Farm Pony stable. There are 59 pieces and accessories for kids to show what they know about farmlands and ponies.

The pack features 2 child figurines, 2 toy horses, a stable with a door that opens, a ripping hay feeder, and trough. Other stable implements like a brush for grooming the ponies, a pile of apples for feeding the ponies, pitchfork to transfer hay, hay brick, and shovel are also included as accessories.

Your kid should be able to learn the basics of caring for farm animals and stable/farming lexicon. 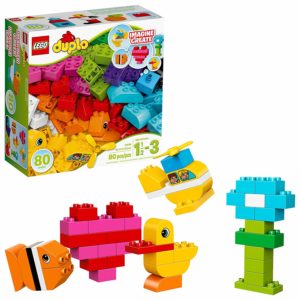 For a 3 year old, this colorful Lego building kit is the ultimate introduction to the world of Lego bricks and the creativity required to build different things from ground zero.

With 80 pieces of various colors and sizes, kids can build anything they can think of. To help them get off to a good start, building cards are included in the pack.

There is even a propeller to encourage them to build a helicopter. With so many pieces, kids can build just about anything they can think of after figuring out the basics. 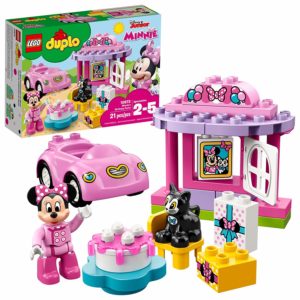 Minnie Mouse is having a birthday party! And your 3 year old is the event manager in charge of planning every aspect of the bash.

With 21 Lego pieces, all that is needed is a creative mind with an active imagination to create a birthday bash befitting Minnie. The pack features a buildable birthday cake, Minnie’s pink car, Figaro the cat figure, and of course a doll figurine of Minnie the celebrant.

Other features include two bricks decorated as birthday presents, the birthday venue with windows that open, chair, and table.

That this would be a birthday to remember is not in doubt as long as your kid allows his/her role-playing skills to flow unhindered.

There you have them, the best Lego sets for 3 year olds reviewed to make the task of selecting a Lego set for your kid a lot less daunting. Any of the toys reviewed above would make a very nice present this holiday season or at any other time.

If in the unlikely event you have to go outside this list to get a Lego set for your kid, make sure you tread carefully before making a purchase. But, we guarantee that any of the toys reviewed here would bring so much fun and the attendant benefits to your 3 year old kid.