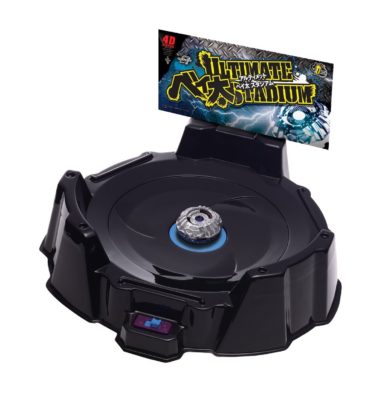 If you are starting out new into the world of Beyblades, you would realize that a Beyblade Burst stadium, also known as beystadium, is one of the most important parts of the game. The spinning tops, known as Beyblades and the launcher make up the other important components of the game.

Here is a comprehensive review of the best beyblade burst stadium in 2019.

The Beystadium is where all the action and battles take place after the Beyblades are launched by the players. Shaped like a giant bowl, they are mostly made of hard plastic

So what are these features that make one beystadium better than the next?

Size of the arena – as far as the size is concerned, there must be a fine balance between too small and too big.

The optimal sizes should hover between a diameter of 15 and 18 inches. But when you have more than two players, it is better to go for the upper limit.

Sometimes, even two adults or teenagers find it difficult to play in the standard smaller arenas. It is really awkward to launch the beys in small arenas. Players would simply get into each other ways.

Shape – though the classic shape is round, new designs featuring multiple-sided arenas are now common. But no matter the shape, the design should push the beys towards the center to engage in battle.

So the bottom of the best Beyblade Burst beystadium should curve inwards towards the center. That would force the spinning tops to eventually meet there.

Walls – the walls essentially serve to keep the beys from spinning out of the arena. The higher the walls the better since some of the spinning beys bounce a lot.

Some walls come with features such as spikes and gaps to knock opponents off. Others have little holes or pockets where the beys topple into during the game.

In cases like these, players have to control their launch to avoid such pitfalls since that equates to losing the battle.

Material – Generally, beystadiums are made of plastic. The quality of the plastic matters though. The higher quality plastics are more durable and the surfaces remain smooth for a long time.

The smooth surfaces ensure the Beyblades don’t suddenly bounce up and out of the arena after hitting a slight bump. 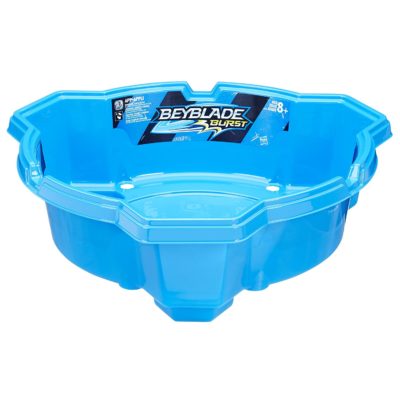 The Beyblade Burst Beystadium is one of the top-rated beystadia for several reasons. Though it is just a basic beystadium, the combination of a low price tag (it is a very cheap Beyblade stadium), durability and unusual design makes it appealing to gamers around the world.

The baby blue beystadium is about 14″ in diameter and the height of about 5″ makes it rather cavernous. The kids’ Beyblades would have a hard time bouncing out of the arena.

This is a great beystadium for bursts tops with its slightly concave base and would be great for newbies just cutting their Beyblade Burst teeth.

This cheap Beyblade stadium from Max Steel is one of the few beystadia that is good enough to challenge the duopoly of Beyblade and Takara Tomy’s products in terms of quality and reliability.

The 17″ diameter, 2″ high plastic, baby-blue arena features entrance ramps through which Turbo Battlers could be launched easily. The edges and ramps are designed to knock off spinning tops from the perimeter towards the center to increase the intensity of the duels.

The battle arena is smooth and inward curving for greater spins and battling action. 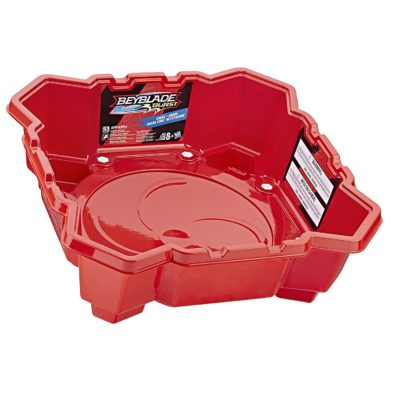 Burst Chaos Core beystadium is another cheap Beyblade stadium with a basic design that belies its awesome features.

The corners of the cherry red plastic arena are outfitted with four deep penalty pockets. It has a molded wheel-shaped design at the base making it an excellent den for spinners designed primarily as attack Beyblades.

And for those who love playing the game on their smartphones, scanning the code on the beystadium would give instant access to the Beyblade Burst game featuring this arena.

The octagonal arena is just over 5 inches high with a diameter of about 15 inches. 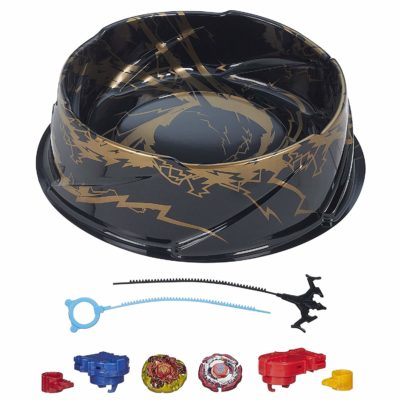 The Beyblade Super Vortex beystadium stands out for its intricate design both aesthetically and in the features.

The inner wall of the beystadium has ridged ridges. This makes for unpredictable and thrilling battles. Unfortunately, Beyblades are prone to bouncing in this arena; but the 4.2 inches high walls do a good job of keeping them in.

This beystadium is part of a set that comes with Ray Striker and Gravity Destroyer tops, 2 ripcord launchers, and other accessories. This makes it rather expensive to get hold of the arena. 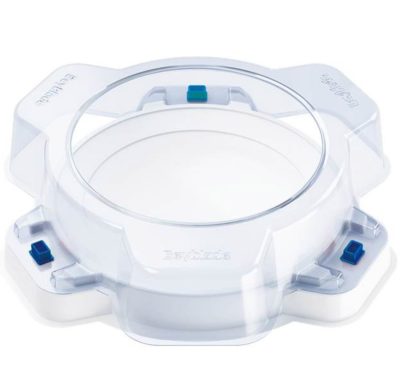 The price tag on this unique beystadium might scare you off, but there is a reason for that: it is an arena that comes with several parts that need to be assembled to get a domed, covered beystadium.

The white plastic beystadium is 4″ inches high and at a diameter of 18 inches, it is certainly one of the biggest battling arenas out there.

The clear plastic dome cover can be attached to the base of the beystadium via the blue rivets. This ensures none of the Beyblades would bounce out and hurt somebody.

The minimalistic design and unique futuristic shape makes the price tag a little bearable. Besides, it is a strong, sturdy product. 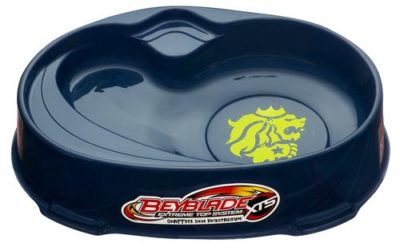 Hasbro’s Extreme Graffiti beystadium is designed for fast Beyblade tops up for the battle with great staying power.

The navy blue arena is shaped like a kidney and slopes sharply toward the center of the 12x10x3 inch arena. It is battle to the finish as it is hard to get a ‘stadium out’ by the spinning Beyblades.

Suitable for not more than 3 players at a time, the plastic arena is one of the most unpredictable beystadia.

It is advisable not to bring the face too close to the arena. Pieces are known to bounce out and can harm the eyes. 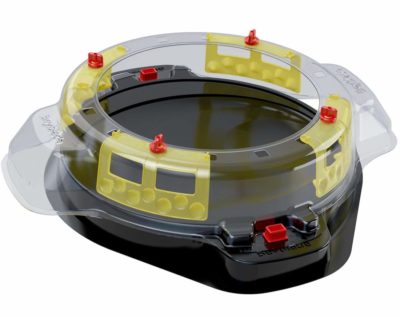 The first thing noticeable about the B-19 stadium is the design. The contrasting base and top plastic cover makes it a beautiful arena to purchase as a present for your kid.

At a diameter of 18 inches, there is enough space for a gripping battle. And the decent 4″ wall around the beystadium does a good work of keeping the Beyblades inside the beystadium.

There are spikes around the walls that give the Beyblades added juice increasing the length of duels and the excitement too. 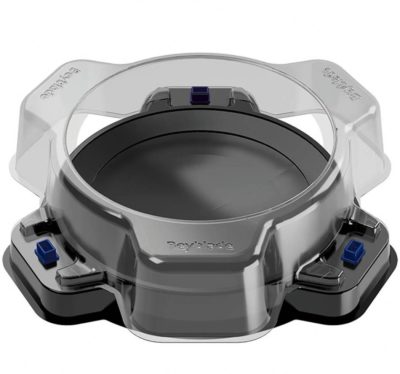 The B-33 beystadium is another in the B-series of battle arenas from Takara Tomy. This is similar in design to the B-19 above but differs greatly in the price tag. The B-19 is pricier.

The covered design makes an appearance here too to stop the spinning tops from bouncing out and doing a bit of harm to players. The Arena is just 16 inches in diameter with a 4-inch high wall making it more suitable for younger players.

The plastic material seems rough and durable enough to stand the test of grueling duels. And like the best beystadia, it has a bottom that slopes towards the center to encourage more intense battles. 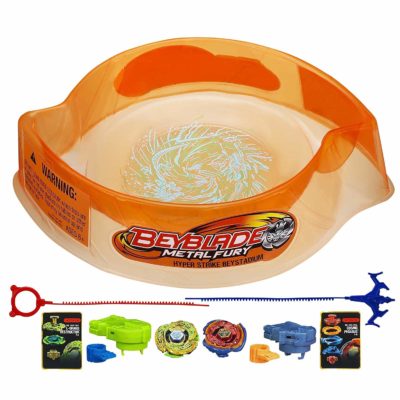 The beautiful Beyblade Metal Fury beystadium comes as part of the complete set of the Beyblade burst game.

The 4″ high arena with a diameter of 15 inches is relatively small. This would make a suitable beystadium for the very young players.

The orange colored arena is beautifully designed and it is as tough as the best. Battles in this arena are almost non-stop due to the relatively steep slope of the base.

This is a top-notch product to purchase for your kids as a present. It is just too bad the beystadium is not sold as a single, separate product.

This beystadium is the latest product from the staple of Takara Tomy. The pitch black arena looks like a prototype for future models of beystadium from the manufacturers.

The beystadium has a modest diameter of 15 inches. At 8 inches deep, it is one of the most cavernous beystadia. Beyblades would have a hard time bouncing out from the battle.

The plastic beystadium requires 3 AA batteries to power the Nemesis Beyblade stuck at the center of the arena. A typical game involves trying to knock Nemesis off balance with a launched Beyblade.

The biggest downside is the price tag. It is very expensive.

So there you have it. The products reviewed above would deliver all the fun and excitement of Beyblade Burst in spades.

These are wide-ranging products that meet most, and in some cases, all the qualities you’d expect from an awesome beystadium. Go ahead and get one for your kid or a friend’s kid as a present. They would be extremely excited and grateful.

Remember, you can also join in the fun. And if you don’t know anything about the game, you can learn from the lucky kid. Be warned though, the Beyblade burst game can be addictive, and having the best beyblade burst stadium to play on makes it more easier to get hooked up on the game. 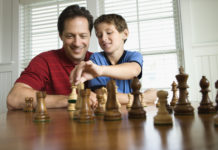 Best Board Games for 10 Year Olds