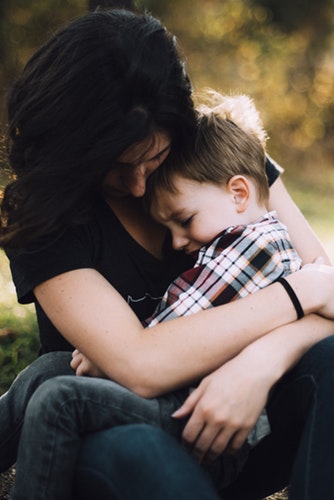 Childhood tantrums can be messy and downright terrible, but they are an integral part of your child’s childhood.

Your young child is yet to develop good coping skills so throwing tantrums is one of the ways that they deal with situations that they are unsatisfied with.

It’s difficult to avoid having a meltdown yourself especially when you’ve tried everything you can to calm your child down, and they still won’t stop the outbursts. But this is most likely because you’ve not learned how to tame your child’s tantrums. Yes, there’s a right, and a wrong way to do it and using the wrong methods would only upset your child further, and prolong their tantrums.

Here are nine effective ways to calm your child when they’re throwing tantrums.

The first thing you must do is to understand why kids throw tantrums. It will keep you from responding negatively when it happens.

Understanding why tantrums happen helps you to develop empathy rather than get mad, and all stressed up when your child is naughty.

Children, especially those between the ages of 1 and 3 are yet to develop strong emotional and social skills.

They can’t express what or how they feel, so they resort to tantrums as their way of communicating and managing their feelings.

Tantrums may also be caused by situations like hunger, stress, fatigue, and other strong emotions.

Children who throw tantrums may also be experiencing some strong underlying emotions like fear, shame, distrust, or anger.

Tantrums are also frequent with temperamental children— children who are quick to anger.

It’s very stressful to deal with a child who continually throws tantrums; you may end up stressed, or find yourself reacting negatively if you don’t learn how to cope with the situation and separate yourself from the stress and anxiety.

Here are a few ways to cope with your child’s tantrums and prevent it from affecting you negatively:

Take a deep breath as soon as they start throwing tantrums; it helps you calm down.

Understand and accept that your child’s emotions and how they react to those emotions are not always within your control. Until your child’s coping skills have fully developed, there’s nothing much that you can do to prevent them from throwing tantrums.

Understand that your child is not doing it on purpose, or doing it to hurt you; they just don’t have the right skills to deal with situations yet.

Turn on your sense of humor- don’t laugh at them as that may upset them but train yourself to see the tantrums as funny rather than irritating or upsetting.

Ignore other people’s judgmental looks and opinions when your child throws tantrums in public- they’ve probably never had to raise kids otherwise they’ll understand that it is entirely natural.

Understand the direct cause of the tantrums and devise a plan to handle the situation- are they hungry? Are they afraid? What would you do to eliminate the trigger?

Devise your plan for taking care of the problem and stick with it- its less stressful when you know how to deal with the situation at hand compared to when you’re confused and unsure about what to do.

Yes, except your child is doing something that can put them in harm’s way, the best approach is to ignore them.

Find out what is making them upset and if you can’t find any immediate cause, or can’t do anything to help the situation, then ignore him, leave the room and set a timer for when to check back on him.

When you ignore a tantrum-throwing kid, you’re teaching them that such behavior is not the best way to get mom and dad’s attention- it helps to discourage them from engaging in such habits.

If your child starts being destructive towards themselves or other children or properties around them, you have to immediately stop them and make them understand that destructive behaviors are not acceptable.

Make sure you communicate this to them, and withdraw a privilege or put them in time-out as punishment.

They may throw more tantrums but be firm and enforce punishments; eventually, they’ll get the message.

Don’t go into a shouting match with your child; you have to show them who is in control.

Don’t yell at them and try to match their volume when they are frustrated, instead, you should speak softly. The more they scream, the softer you should talk.

It helps to calm them down and shows them that you are in charge, and in control of the situation.

Children have short attention spans, and you can quickly divert their attention and prevent a meltdown by getting them involved in another activity.

If she’s yelling at the supermarket because you won’t buy her some ice-cream, you can ask her to help you choose something you do want to buy.

This might be the last thing you want to do when they’re throwing tantrums, but it helps to give them a sense of security and lets them know that you love them and care about them even though you can’t give them what they want at that moment.

It also helps to reassure your child in cases where their tantrums are triggered by strong underlying emotions like fear, anger, distrust, or other insecurities.

You know how cranky you can get when you’re sleep-deprived? This also happens to kids, and since they haven’t learned many coping skills, they’ll throw tantrums instead of just going to bed.

Try to get your child to bed calmly and put them to sleep so they can relax their nerves and relax.

#9. Give them an Incentive

If there’s something your child wants that you don’t want to give them and they’re throwing tantrums about it, try to give them some incentive that they may like — there’s nothing wrong with bribing them as long as they are not destructive or harmful towards others or themselves otherwise, incentivizing them is not the best approach and may encourage bad behavior. 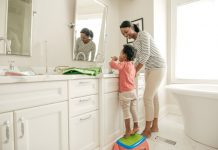